Born from the grindhouse flea pits on 42nd Street of 70’s New York, Frank Henenlotter’s gloriously grim and grimy debut feature, Basket Case is a trash epic of glorious excess. Made in 1982 on a minuscule budget (which shows, believe me) it’s the sort of out-there genius that followed the do-it-yourself delirium of Sam Raimi’s The Evil Dead but laid serious foundations for the similar gore epicness of Stuart Gordon’s Re-Animator and Peter Jackson’s Bad Taste.
Shot on the actual scummy streets that inspired him, the writer/director’s movie plays like the kind of time capsule that would give the New York tourist board a myocardial infarction that would drop an elephant stone cold dead as real pimps, prostitutes and porn theatres are wall to wall and you can virtually taste the scum of the streets in the back of your throat.

Into this pee-pee soaked, heck-hole wanders Dwayne Bradley with sizable bundle of dollars in his pocket and an oddly ominous wicker basket tucked under his arm. Booking a room in the first weirdo-crammed, flop house he passes, Dwayne starts casing the addresses of certain doctors in the area while lugging that padlocked basket around literally everywhere he goes. Who is this kid? What’s his beef with these doctors? And the most intriguing and pertinent question of all: what’s in the basket? The answer? It’s Belial Bradley, Dwayne’s malformed, vengeful, conjoined twin, THAT’S who; and together the diabolical Bradley brothers aim to extract terrible revenge on the surgeons who separated them years ago against their will on the say so of their callous father. However, their mission of revenge hits a sizable snag when Dwayne starts seeing the receptionist of one of the doctors which slowly starts to drive a wedge between the formally (and literally) inseparable brothers. As lumpy little Belial starts to feel what Dwayne feels thanks to their freaky link they feel due to their previously joined condition, jealousy and murderous intent starts to stir in the twisted breast of the physically mushier brother – not something that could be described as a good thing when Belial has no way to process these emotions, has a violent temper anyway AND has the ability to rip someone in half like a phone book. As Dwayne vainly tries to keep his relationship a secret and the various oddities that populate the hotel get ever more nosey, a tragic showdown between the brothers proves to be inevitable and messy as Kaine and Abel – if Kaine happened to be two feet of deformed, murder monster.

Resembling a rubbery, fanged genital with all the impulse control of Animal from the Muppets, Belial Bradley is surely one of the most bizarre denizens of the horror hall of fame. Prone to violent fits of abandonment, jealousy and long periods of uncontrollable autistic screaming, he’s as a real and complicated character as he is dopey and phoney looking, hurling himself at his victims out of his trademark basket like a face-ripping jack-in-the-box. He’s the chaotic ying to the more innocent Dwayne’s yang and as the bipedal of the twins spends more time in the city, makes friends and even scores a date with a sweet receptionist, jealousy broils between the two siblings until things come to a terrible, tragic head.
First, let’s address the fleshy, deformed elephant in the room and there’s no other way to put this: Basket Case is a cheap-ass movie. From the sets, to the stagey (yet effective) performances, to the amusingly bad special effects (with some of the worst stop motion you’ve ever seen), it’s easy to write this film off as one of those so-bad-it’s-good movies that it’s ironically cool to love these days. Well, I call decisive bullshit on that, because due to it’s truly inventive script, sterling character work and the earnestness of the everyone involved, Basket Case is a low rent, high concept masterpiece of skin itching gutter horror. I understand that may be a little far fetched to believe when the film features a two foot creature tearing a full grown man in half and then hiding out from the authorities in a toilet, but as far out and crazy as the film gets (and when a horny Belial wants to try out some of this sex lark for himself it gets pretty fucking crazy) all of the characters are rich, three dimensional humans whose emotions and reactions make perfect sense in relation to, what essentially is, a greek tragedy of two brothers falling out. It is also, of course, hideously fucking funny.
Some will undoubtedly be put off by… well, everything. Announcing Basket Case as off-beat is as much of an understatement as stating Jaws is a movie about fish, but weather the perfect storm of extreme splattery gore, psycho-sexual subplots and old school New Yorkers brazenly yelling at everything and everyone and you’re in for a sleazy treat that’s not easily forgotten. 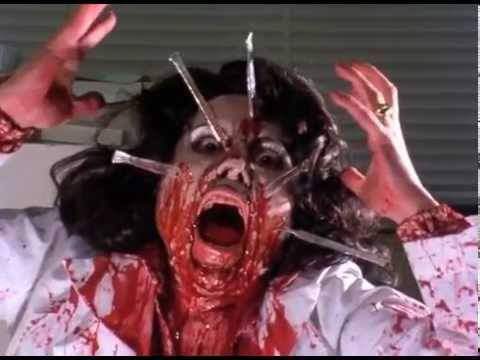 For Henlenlotter, he was somehow able to surpass this misshapen titan of trash cinema with his superior (and crazier) follow ups Brain Damage and Basket Case 2, but his original still has the insanity and originality to hold it’s own.