When Sylvester Stallone puts his mind to it his screenplays are timely and full of conscience, be it the tackling intercity poverty or the fate of POW’s still being held after the Vietnam war in both Rocky and the second Rambo movie. However, when he gets it wrong… by God, does it go wrong. I could site the stunningly misjudged vanity project Cobra and it’s jarring politics regarding gun control and excessive force in law enforcement but instead let’s focus on the most impressive example of bad timing in action movie history.

Let’s focus on Rambo III.
The fact that Stallone released a flag waving, pro-war movie that painted the Russians as such sneering uber-villains, it makes Rocky IV look like the very picture of subtlety, is par for the course (it WAS the 80’s after all); but the fact that it was released barely a year before the Berlin Wall came down shows how out of touch the movie actually was, instantly dating it as a relic before you could even say Glasnost. Also trying to bring attention to the plight of the Mujahideen in their struggle would have been far more noble if it hadn’t been handled so oddly. Having Richard Crenna passionately compare the Russian’s war in Afghanistan with what happened to the Americans in ‘Nam doesn’t make any sense if the Russians are portrayed in the movie as the bad guys. Similarly, comparing the Mujahideen to the Viet Cong is also somewhat bizarre considering they were the villains in Rambo 2, easily as sadistic as the Soviets are in this movie. The film employs this kind of confusing logic literally all the way through, molding then-current history through the prism of an 80’s action movie for it’s own ends.
Anyway… 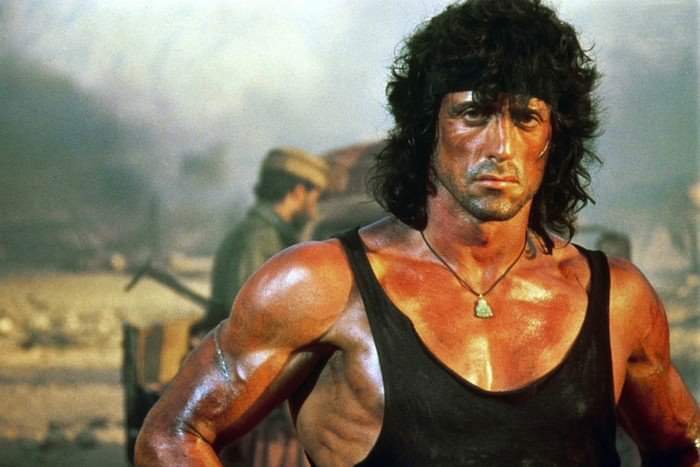 We rejoin the man, the mullet, legend living peacefully with Buddhist monks in Tibet who, when he isn’t fixing the wheels on carts, is participating in brutal stick fighting matches to earn some extra moolah for the monastery (no one mentions that this may actually be the most un-Buddhist thing you could ever do, but never mind). Once again, Colonal Trautman enters his life with the proposal of another mission, this time in Afghanistan to aid the mujahiddin against the Soviets, which Rambo promptly refuses, claiming he’s done with war for good. Trautman goes off on the mission and is promptly captured (possibly because he’s heading up a mission on foreign soil at the age of 62, I’m not sure), so Rambo saddles up for one more mission to save his friend. That’s literally it for the plot, the rest of the film is ever escalating carnage filled with a procession of endless explosions that gets progressively more outlandish as it goes on. The second movie in the franchise walked the tenuous tightrope between exaggerated action and unmitigated stupidity with confidence and style but the third movie staggers across it like a drunken man with inner ear problems learning to ride a bicycle as the movie simply expects us to buy it’s bullshit just because it’s lead has really big muscles. Take for example the scene where a wounded Rambo yanks a five inch shard of metal out of his abdomen, pours gunpowder directly into the wound and lights it to cauterise the injury. Now, I’m not exactly sure what medical school John Rambo attended during his training but I’m fairly sure you can’t plug a bleeding artery by detonating 1/5 of your intestinal tract… also, getting into a climatic game of chicken with a massive helicopter gunship while you, yourself are driving a tank is fairly illogical considering that a helicopter can… y’know… go up – and yet, staggeringly, it works.
A far better version of Rambo III exists in the world and you probably know it as Hot Shots Part Deux, as the spoof mercilessly mimics the vast majority of it’s plot right down to specific scenes, but it doesn’t have to try very hard as Stallone’s epic action dud is mostly fantasy to begin with.

“The first time was for himself!” screamed the movie’s tag line with all the restraint of Gary Busey, “The second was for his country! This time it’s for his friend!”
He should have stopped at his country…
🌟🌟