To quote Sir Mix-a-lot, surely one of the finest bards of our time: “My anaconda don’t want none less you got buns hun’.”
Truly inspiring words to be sure, however, back in 1997 this particular anaconda wanted more than buns… Presenting the first of an unofficial trilogy of big budget creature features that slithered, swam and crawled into cinemas in the latter part of the 1990’s, Anaconda (along with Lake Pacid and Deep Blue Sea) introduced a 40 foot long star with the ability to crush the very life from you to the point where it could pop the eye out of your head quicker than Joe Pesci in Casino.
However, while Anaconda is admittedly an exercise in overexcited camp, time has been oddly kind to this reptilian Jaws ripoff as it’s positively stacked with up and coming actors gamely throwing themselves into such entertaining trash.

After an early sequence where a massive predator stalks an alarmingly young looking Danny Trejo (proving that although Machete may not text, he does, in fact, make delicious snake chow) we are introduced to a film crew heading by boat through the rain forrest in order to film a documentary about a missing tribe. Jam packed full of stock characters played by various famous faces early in their careers we have J-Lo herself, many miles from the block, as a feisty latino director, Ice Cube as her street-wise camera man and Owen Wilson playing every horny male character from every cheap horror movie ever. Rounding out the crew is that nasty hunter from Jumanji as a pompous presenter and the living personification of the 90’s, Eric Stoltz.
Eventually they come across Serone, a Paraguayan snake hunter played with relentlessly resting rape face by Jon Voight who takes the role as an opportunity to speak all of his lines through an unyielding accent and the sleeziest sneer you’ve ever seen. Remarkably, no one seems to think that letting this character onto the boat could possibly have negative ramifications despite him banging on about giant snakes like they’re rock gods and saying things like “This river can kill you in a thousand ways.” despite the fact nobody was asking.
Anyway, after Stoltz is rendered out for the count due to a poisonous wasp suspiciously ending up in his diving respirator (again, no one even fucking glances at Voight) the crew take Serone’s advice to get their wounded member to a doctor but instead to everyone’s surprise (except ours) he leads them in the hunting ground of an absolutely humongous Anaconda which starts deep throating various members of the cast, and not in a good way… 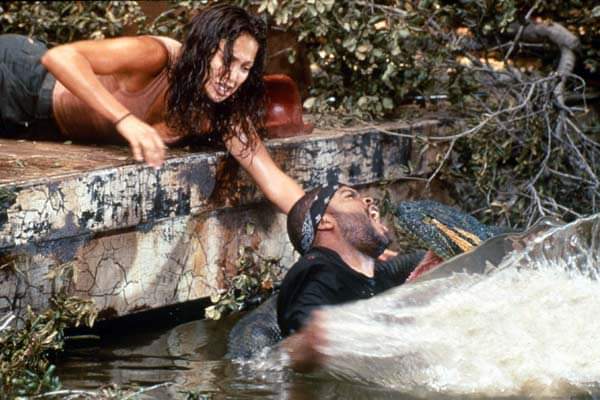 Watching this group of actors recoil in horror while climbing the ladder of fame would be fun enough on it’s own (it’s highly doubtful you’d catch Lopez dead in a movie like this nowadays) but an extra bonus lies in the title creature itself being so vividly realized. Thankfully avoiding having it’s leads wrestle a lifeless rubber snake like an old Tarzan film, the movie employs decent CGI and above average animatronic to create a suprisingly sprightly that proves to be an entertainingly efficient monster. Lashing out at it’s victims like a beady-eyed bullwhip and gobbing dead monkeys at people like a furry, matted loogie, it also has the unnerving habit of violently regurgitating it’s food in order to immediately feast again like some sort of serial killing bulimic and a one point throws up an eaten victim directly AT a screaming cast member presumably because a 40 foot snake can’t pronounce the phrase “fuck you”.
Lopez gives good heroine and Voight seems inhumanly committed to portraying a character more cold blooded than a snake the length of a blue whale’s lower intestine but a lot of laughs come from Ice Cube who flat out refuses to give anything close to a realistic performance. Spouting lines that wouldn’t seem out of place in Boyz N The Hood but are hilariously stupid in the middle of the Amazon his character cruises through the film made all but invulnerable from the big squeeze by the simple fact that he’s being played by motherfucking Ice Cube. 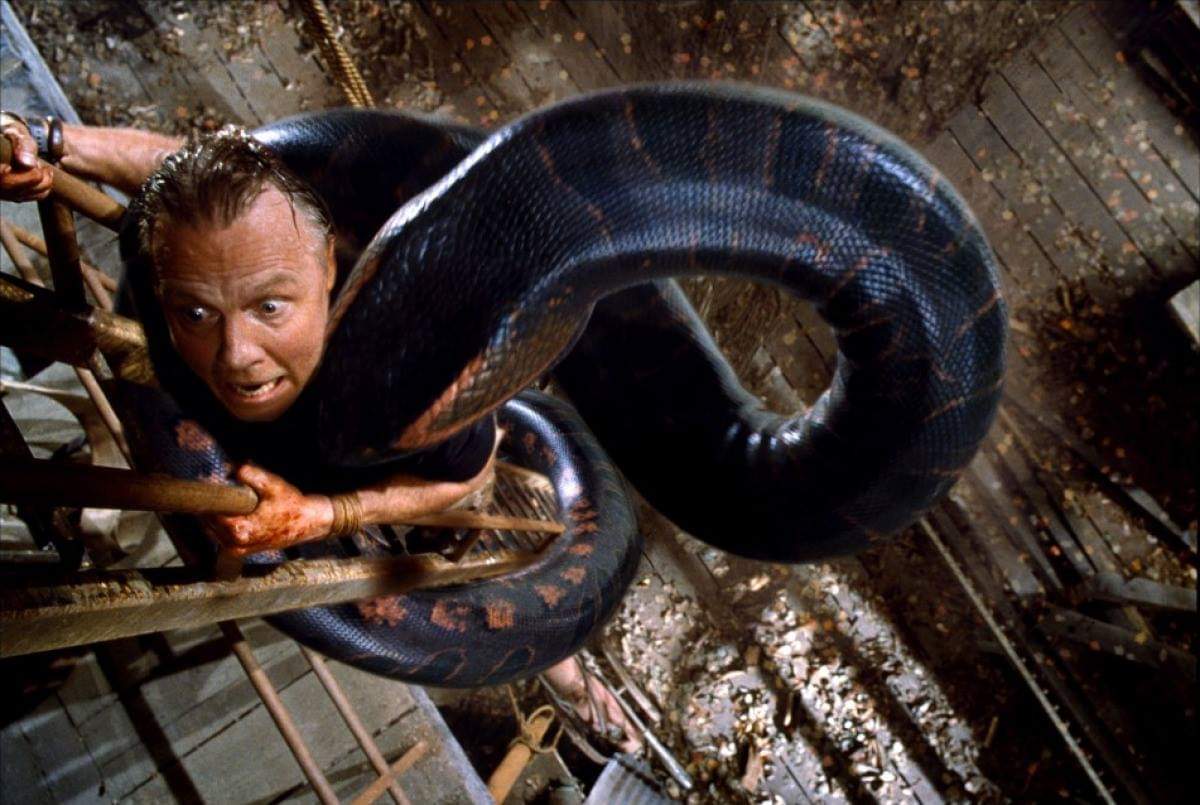 Despite the movie asking us to swallow faults that even it’s scaly star would have trouble choking down, this particular snake charmer is huge disposable fun and is always a good bet whenever it slithers onto a streaming service or a movie channel.
A classic tale of boy meets coil…