After about 8 years of being off the air, Marvel’s most successful attempt at getting any of their properties realized at the time returned for the first of three TV movies carrying on the lonely trudge of one Doctor David Banner. However, this time the Hulk wouldn’t be smashing solo as other, previously unseen marvel characters would finally making their long awaited (if decidedly low budget) small screen debut.

It’s been 2 years since scientist-on-the-run Dr. David Banner has had one of those incidents where he turns a fetching shade of emerald and throws rednecks through windows in slow motion and has settled down under the alias of David Bannion (yeah, good one Banner). He has a thriving relationship with a young widow and a job in a laboratory where he has invented the Gamma Transponder, a machine that he hopes will keep him from any of his chaotic outbursts that causes him to relocate more than the Littlest Hobo.
Into his life walks and old student of his, Donald Blake who reveals he has an inconvenient double-life of his own going on as a trip to Norway placed a magic hammer in his possession which handily allows him to summon Thor, the viking God Of Thunder who turns out to be somewhat of a well meaning but brash idiot. After nearly fatally electrocuting Banner because, as I literally just stated: he’s an idiot, Thor and The Hulk scrap clumsily and the Hulk runs off.
However, an evil Cajun villain business guy – we know he’s a nasty customer because we watch him angrily play racquet ball in slow motion – has an insidious and pointless plan to steal the Gamma Transponder for reasons I obviously must have zoned out for. After various attempts the bad guys settle on kidnapping David’s lady friend (because this is 80’s television and the girlfriend ALWAYS gets kidnapped) and holding her for ransom. Can Thor and Hulk settle their differences to save the day from…. something? I guess? I’m REALLY not sure why the villains are doing ANYTHING in this film but I’m assuming is illegal or some such shit. 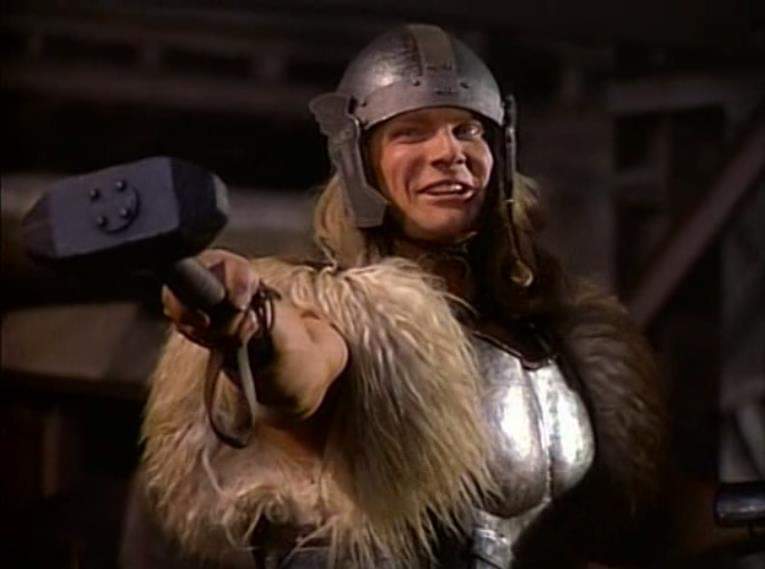 So, if you haven’t already guessed, the film sort of stinks. For a film called The Incredible Hulk there’s precious little Hulk and not even a whole lot of Banner and when there is, it’s actually quite boring as neither really have much to do apart from tap keyboards and growl at thugs. In fact it’s quite alarming how much Bill Bixby’s screentime slows everything to a crawl with his relationship, his quest for a cure and the resurfacing of snoopy reporter Jack McGee (a worryingly frail looking Jack Colvin) adding nothing to a film he’s technically the star of. In addition to this Lou Ferrigno, while still looking every inch the quintessential, pre-Ruffalo Hulk is both underused by the script and overshadowed by his thundering co-star and doesn’t really get a chance to shine until the bar-bending climax.
Thank Odin for Eric Allan Kramer’s Thor then, who single handedly steers this TV movie from dreary bilge to campy trash by the power of his blustery overacting alone. Best known (I guess) for his portrayal as Little John in Mel Brooks’ Robin Hood: Men In Tights, Kramer is a suprisingly perfect fit as Thor the way he was originally written in Marvel Comics back over the last 30 years (a muscle bound meat head who screams “Odin” a lot), he even freakin’ looks like the guy and if it wasn’t for his atrocious costume – which looks like it was liberated from a fancy dress shop after a fire – he’d actually be spooky perfect. The more scenes he appears in the better the film gets and his verbal sparring with Blake eventually gives way to bonding and brawling in a biker bar and would’ve made far more enjoyable movie than the one we actually got and actually leads to some frequent laugh out loud moments – some even intentional: behold Odin’s spawn wandering around in towel. Yet when the film finally gives us the Thor/Hulk team-up’s we obviously so desperately want and they start playfully walloping thugs with steel girders and dangling from helicopters like drunken earrings, the movie achieves a short lived yet oddly sweet state of nirvana that’s not going to give Thor: Ragnarok any sleepless nights any time soon, but is stupidly silly enough to entertain. 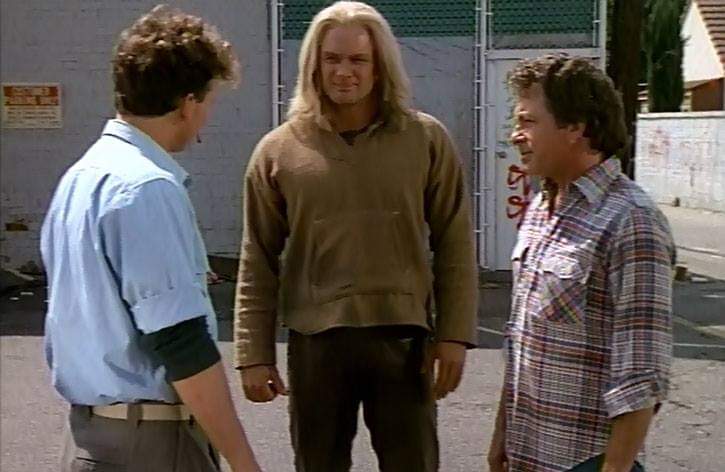 Hardly incredible but on a TV budget, that’s pretty par for the Norse…
🌟🌟