Wes Craven’s original Nightmare On Elm Street is a peerless exercise in reality bending scares, of that there can be no doubt; but running an extraordinarily close second is a film that not only comes the width of a finger-knife of taking the title of being Freddy’s best outing, but can boast of being one of the greatest horror sequels the 80’s had to offer.
As fine a slice of populist horror you’re ever likely to see, for better or worse, A Nightmare On Elm Street Part 3 is the exact moment when America deemed a hideously burned child killer worthy of pop culture superstardom and elevated him to deity levels of fame.
Tooled up with a conceptually perfect script that not only saw input from a returning Wes Craven but also from Shawshank director Frank Darabont and a keen directorial eye from newcomer Chuck Russell (who went on to make the criminally underseen Blob remake and the Jim Carrey launch pad The Mask), Dream Warriors may not be remotely close in being as relentlessly scary as Krueger’s first outing but it more than makes up for it in being devastatingly awesome and jaw droppingly imaginative.

A rash of unexplained teen suicides is plaguing the town of Springwood and the latest to almost join their numbers is Kristen Parker, a young girl who has a supernatural gift to bring the consciousness of other people into her dreams. Getting sectioned at Westin Hospital, Kristen is calmed down by a returning Nancy Thompson, now a teen counsellor and an expert in dream psychology and the two are introduced to the remaining inmates who all come from different backgrounds but are all suffering the same nightmares. Nancy reveals that the figure stalking them while they toss and turn during REM sleep is murdered child killer Freddy Krueger, who has sworn vengence on the children of the parents who burned him alive and that they are all the last living remnants of the original Elm Street children.
Gearing up and preparing themselves to protect themselves from both an undead serial killer and the repeated attempts of the well meaning staff to sedate them, the group find that they have special powers in their dreams and figure that if they can utilize them they just might survive the accelerated culling Krueger has set in motion but when he abducts one of their number (essentially rendering him comatose in real life) these “Dream Warriors” will have to set up their plans and try to take out Freddy on his own turf. 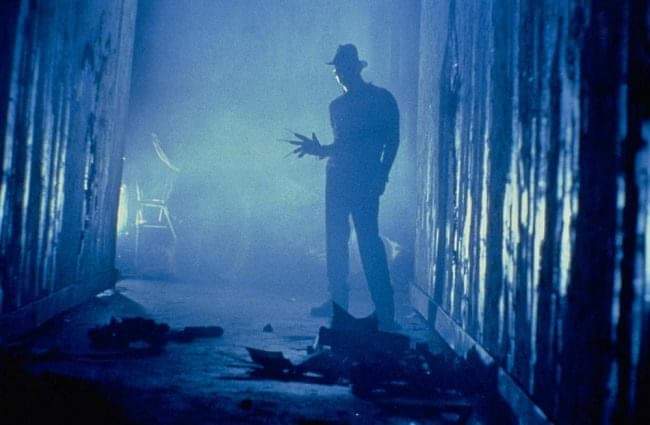 Emerging from the muddled combo breaking storytelling of Part 2 to firmly re-establish the rules of what the wise-cracking dream demon can and can’t do, Dream Warriors takes it’s sectioned teens storyline and runs with it to spectacular effect creating a winning Dragon Ball Z style fusion dance of melding everything from The Breakfast Club to One Flew Over The Cuckoo’s Nest to Stephen King’s 1986 novel It together to create an insanely inventive and deeply cool sequel that fizzes with more vitality than a lifetime supply of Monster Engery drink.
Firstly, the characters are solid, sketched just fully enough for to to actively care when they inevitably fall before Krueger’s boundless, murderous imagination and, yes, their personalities and character trates can be traced back directly to how they die (it’s fairly obvious they were scripted in reverse) but it totally works.
Secondly, the sheer amount of visual imagination here in virtually every department is incredible, sets, sound design, cinematography, visual effects, practical effects, everything is on point (and in camera) in creating bizarre, yet tangible worlds for each character to meet their stunningly intricate demise. Even Krueger himself gets a power upgrade, now able to shift his form into a number of variations, most memorably a giant snake that’s so phallic it would aptly give Freud night terrors.
And oh… oh… those kill sequences… oh…
Getting the delicate balance between the plot and those show stopping dream sequences juuuuust right and actually spending time with the characters before sending them off is Dream Warriors crowning achievement. No longer is Freddy a self harming maniac leaping out from behind pillars – now he’s a shape shifting demi-God of the dream world, manipulating that lack of time and space to make each victim confront their worst fears before he sends then to oblivion via first class. Behold in wonder as pops the courage of a ballsy ex-junkie by displaying that his fingers have turning into hypodermic needles and the track marks on her arms have grown into little hungry, suking mouths… not enough of a low blow for you? Ok, how about when he slashes the wrists and feet of an aspiring puppeteer and uses his exposed tendons as strings to sleepwalk him off like a ghoulish marionette.
Deliriously 80’s in a GOOD way – not only do we get a fresh faced Patricia Arquette but a younger Lawrence Fishburn too as kindly orderly Max (although Taryn’s towering, dorsal fin hair do is a little tougher to defend) – Dream Warriors doesn’t feel it’s aged TOO much, although
for a bonus shot of terminal 80’s-ness check out the jaw dropping music video of “Dream Warriors” by giant haired rockers Dokken.
Techincally the first TRUE Elm Street sequel (sorry, Feddy’s Revenge, but it’s obvious you’re just making shit up as you go) it seals this with the delightful return of Heather Langenkamp as ultimate final girl Nancy and her on-screen father and B-movie legend John Saxon who even gets the honor of fighting with Freddy’s skeletal remains, resurrected into a Harryhausen-esque stop motion bout of awesome randomness.
The final word goes to Freddy himself and the fact that Robert Englund grabbed the prospect of more screen time with both hands and ran with it with the intensity of Mo Farrah. The balance of screen time and puns has been often debated by Freddy fans and it wouldn’t be false to accuse all involved all involved in this movie to contributing to the slide of Kruger becoming a gag dispensing joke of his former self, but for now, Englund is a fucking powerhouse as he torments, teases and terminates his adolescent victims with maximum enjoyment.
After all these years, the third Elm Street’s influence is still keenly felt today with upcoming X-Men spinoff The New Mutants definitely putting out a similar vibe and Bill Skarsgärd’s portrayal of the shape shifting Pennywise in It owing huge to Englund’s gleefully evil, jester-like performance. In fact, if any attempts to further resurrect Freddy’s franchise ever go ahead, you could do a lot worse than giving this particular episode an update as it still has the impact of a skull smashing through a television set.