Don Coscarelli may not be a household name when it comes to cinematic purveyors of fright – not as much as John Carpenter and George A. Romero at least – but this outspoken outlaw of indie horror has been reliably plying his trade in otherworldly scares since the 1970’s.
Stubbornly remaining in the low budget badlands for the majority of his career, he’s fashioned many a cult classic from fantasy oddity The Beastmaster to peculiar comedy/horror adaptations Bubba Ho Tep and John Dies At The End; but when it comes to jewel in the crown of his particular output, it’s the Phantasm series he’s most famous for.
The original movie is a stone-cold exercise in trippy, hippy-horror, that melded dreams and reality with lithe dexterity that pre-dated A Nightmare On Elm Street by a good 5 years and while the original is an undisputed weirdo classic, subsequent sequels varied wildly in quality, becoming all but inaccessible to any casual viewer who dared to wander in. This second instalment, however, stands slightly apart. It was the only entry to be made by Coscerelli while traversing the studio system while boasting something approaching a healthy budget and while studio interference is usually a stake in the heart for fiercely original indie horror, here it makes this installment by far the most easy of the 5 movies in the franchise for novices to navigate – and for a movie that contains a girl’s spine growing a face and trolling our heroes, that’s certainly fucking saying something. Streamlining and simplifying the original’s dream infested plot allowed a general audience to penetrate it’s bizarre universe as cleanly as a drill bit entering a skull and oddly makes this second entry the perfect launching point for anyone ready to embrace it’s surreal charms. And what charms there are…

We join proceedings immediately after the climax of the original movie revealed the vast majority of Phantasm’s runtime to be a dream which is attributed to the grieving process of teenager Mike as he processes the death of his idolized older brother Jody. However, we instantly are flung into the “OR WAS IT” end of the pool when it turns out that The Tall Man, the nightmarish villain of Mike’s night terrors, turns out to not only be very real, but has now set his sights on the teen for mysterious reasons. Barely escaping with his life thanks to family friend Reggie, we pick up with Mike (James LeGros replacing original actor Michael Baldwin) being released after a lengthy stay in a sanitarium as apparently kicking up a fuss about killer dwarves and space morticians gets you sectioned quicker than a hiccup. Mike’s been having dreams about not only his other worldly nemesis but also about Liz, a young women who shares Mike’s sensitivity about The Tall Man and is eager to get on the road to locate both of them for very different reasons. Reggie dismisses his claims only for Mike to have a premonition about a gas explosion that kills his friend’s family that turns out to be horribly accurate, so the two tool up, A-Team style, and hit the road in Jody’s old Plymouth ‘Cuda to pick up the Tall Man’s trail and rescue Liz who has finally popped up on the mortician’s radar. In his quest to create his dwarven army out of crushing down and re-animating the bodies of the dead (think meth addicted Jawas) the Tall Man has left a succession of dead towns in his wake which unsuprisingly proves pretty easy to follow and so an inevitable showdown is on the cards with Mike, Reggie, Liz and hitchhiker, Alchemy on one side and the minions of the Tall Man on the other but can three kids and one bald, middle-aged, ex-wife cream vendor possibly hope to even make a dent in the monster’s plans when they have to face killer midgets, hulking gravediggers, sinister undertakers and, most lethally of all, those flying, skull drilling, swizz army knives of death – the silver spheres?

Choosing the Evil Dead 2 route of kinda/sorta remaking the original movie with better effects and cool action pays off in spades for Phantasm II as it’s major selling point is it’s super-funky, surrealist action set pieces. For example, the high concept and super gory first scene is a complete re-telling of the previous film’s climax (complete with superb body-doubling for the replaced Baldwin) sees Reggie single handedly fight off a squad of hooded dwarves that’s laid siege to his house using only a baseball bat and an astoundingly reckless use of a gas oven. Yes, we all appreciate the freedom that comes from working outside the studio system but sometimes it’s nice to have a little extra cheddar around to blow shit up extra nice and Phantasm II manages to cobble together some super satisfying set pieces that are not only equally exciting and ghoulish but also packs a fair bit of Sam Raimi slapstick in their too. Mortuary stalking, kickass car chases and a bald fetish sex scene that’ll make your head spin follow, but it’s the utterly boffo horror/action climax that manages to entertain immensely.
In a special effects blowout that you rarely see any more, our heroes armed with a homemade flamethrower and quadruple barreled shotgun (?!?!?) make a last ditch assault on the The Tall Man’s mortuary. Rip roaring chainsaw duels, a trip to another dimension and an unexpected embalming with acid all thrill and chill respectively; but it’s the extended cat and mouse chase as Mike and Liz flee a horribly dedicated spine burrowing, laser shooting, face shredding super sphere (essentially a zippy, shrieking blender that gets off on sticking knives in your face) that blends hardcore gore and imaginative slapstick in ways quite unlike anything seen before or since.
Props obviously go to Coscarelli for thinking this shit up but massive kudos to FX guru Marc Shostrom, who builds upon his already impressive work on Evil Dead 2 to deliver some brain meltingly good creations and also a round of applause to the exceptionally fantastic score in what is a movie experience that I’ve always felt really should be lauded by more people.
The final nod obviously goes to the late, great Angus Scrimm whose squinty eye, commanding performance and immortal reading of the line “BOOOOOOOOOOOYYYY!!” makes this arguably the best of his five go-rounds as the multi-dimensional bastard, The Tall Man. “You think that when you die you go to heaven.” sneers the lanky lord of the dead at one point; “You come to us!” 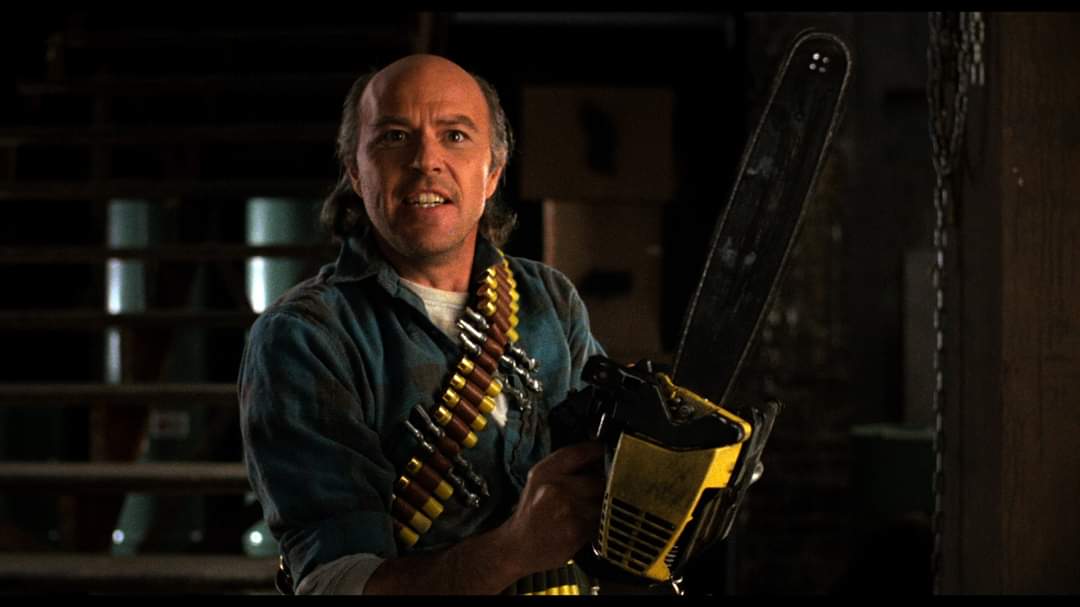