If James Cameron had his way – and to be honest, he usually does – his illustrious filmography of box office breaking, cinematic world building would firmly begin at 1984’s The Terminator; a sublime and relentless sci-fi actioner that broke ground with a limited budget.
However, if we were to go back in time a little further (without the aid of Skynet) we would see that in 1981, a little red smear appears on the author’s resume that looks a hell of a lot like a flying Piranha…
A sequel to the Joe Dante/Roger Corman smash hit Jaws ripoff Piranha, this follow up (alternately subtitled Flying Killers) had a tortured production from the start. After the previous director was fired by Italian-Egyptian producer Ovideo G. Assonitis (most famous for bringing us the cult maelstrom of anti-logic that is The Visitor), Cameron was promoted from special effects director to helming the whole damn thing, however, legend states that Cameron himself was fired two weeks into proceedings with Assontis taking full control over the production. Rumour and conflicting stories swirl like underwater currents to this day – the most famous being that Cameron broke back into the editing room at night to stealthily re-edit his movie and that Assontis was adamant that more nudity be crammed into the film – but one thing is undeniably for certain. Piranha 2 bites, and NOT in a good way.

Located on a scenic Caribbean island, the Hotel Elysium is having a bumper season but a problem sits on the horizon that’s going to cause the various holiday makers a bit more bother than a rained out day at the beach because just off the coast, lurking in an abandoned shipwreck, is a breed of mutant piranha which are a leftover of a long forgotten plan to infest the rivers of the Viet Cong during the Vietnam war. Insatiable in their hunger for the unsuspecting flesh of awful, dubbed actors, if that wasn’t enough these fishy pricks also have the ability to fucking fly and somehow breathe out of water, but no one chooses to remark on either one of these admittedly odd behaviours because aside from being really tasty these people are also idiots.
Among the rare people in the area who have more than a couple of brain cells to rub together are Anne, a diving instructor for the resort and her ex-husband Steve who is the local chief of police and after one Anne’s students turns up with a bad case of being eaten, the two realise something might be up but have no idea what it is or what to do about it. While we watch these two wonder aloud about what exactly they should be doing instead of actually going out and doing it, a bland bodycount slowly rises unchecked thanks to the fact that no one seems to give much of a shit that people are turning up looking like someone’s put a wetsuit or a bikini onto a strip of beef jerky.
Out of nowhere, a guy Anne has been sort of flirting with turns out to be a biochemist responsible for the creation for the piranha and he’s here to try and stop them, so… that’s handy I guess.
As the hotel plans a special night out on the beach, the flappy murder fish prepare to spawn, eat and terrorize and whip around on barely concealed wires so Anne and Steve have to race to try to avoid a lot of holiday goers becoming fish food.

The issues I mentioned earlier that Cameron may have had with his producer are immediately and decisively proved by Piranha 2’s opening, which surely contains the most idiotic sex scene I believe I’ve ever witnessed as a witless couple scuba dive in the dead of night into the bowels of a rusting hulk of a sunken ship, remove all their clothes and diving equipment (?) and clumsily fuck while somehow not drowning. This obviously raises way too many questions than the film is prepared to answer and the subsequent arrival of the school of carnivorous fish that rudely interrupts this bizarre spot of aquatic autoerotic asphyxiation actually comes as something of a relief. However, the rest of the film and almost everyone in it continues to be permanently in heat as almost every single member of the cast seems to be desperately and shamelessly trying to get their end away – even the scene where we’re introduced to Anne uncomfortably involves her son waking her with a fish while she’s obviously naked under her sheets.
Moving on to the rest of the film in general, things don’t get much better – the cinematography is so murky you’d think the entire movie had been shot underwater; the death scenes are lazy and unremarkable, usually involving the victims literally holding a rubber fish to their jugular while they scream and spit fake blood down themselves; and the characters are out and out awful. The residents at the resort are a hideous procession of gurning caricatures who are so vile it retroactively makes the little razor-toothed flying fishy shits the good guys by default and the only person even remotely trying to take things seriously is – of course – the glaring, grim visage of Cameron regular Lance Henriksen, who by my calculations must have been 41 but doesn’t look a day under 50.
Oddly enough, every now and then you actually manage to spot the odd precursor to the future career of Cameron with a piranha bursting from the rib cage of a mangled victim while echoing Aliens being the obvious example. This of course ends up being amusingly ironic considering that Cameron was removed from a film for refusing to add more t&a but then went on to only make features whose titles solely begin with those two exact letters (Terminator, Abyss, True Lies, Avatar etc). 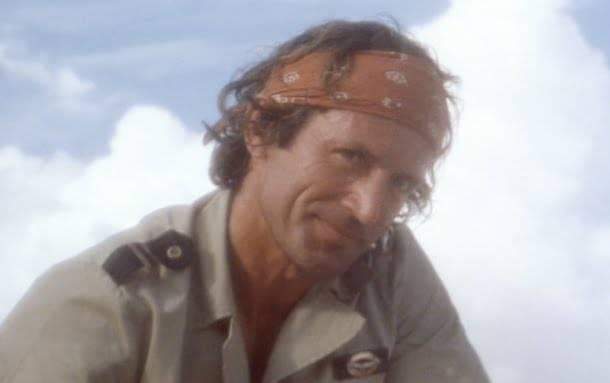 Not only a grubby movie on it’s own terms, Piranha 2 is a poor sequel to a legitimate cult classic (not a single shred of the wit and intelligence from the original remains) and a truly inauspicious start to a legend in cinema which doesn’t so much fly high as float belly up.
🌟