There was a rumour going around that Terminator 3 was only made so Arnold Schwarzenegger could have a guaranteed number one rated movie to give him momentum as he began his race for governor of California. Now, far be it from me to spread unfounded rumours but I WILL tell you this: after watching this completely unnecessary third part of the Terminator franchise, you’ll certainly agree that that statement FEELS like it’s true.

After James Cameron logged off everything Skynet back with Terminator 2, we catch up with a grown up John Connor (high pitched Edward Furlong now replaced by whiny Nick Stahl) living a miserable existence off the grid due to prominent nightmares that persist that the apocalyptic Judgement Day still looms. This theory is proven emphatically correct when a Terminator separately arrive from a future that shouldn’t exist as starts slaying people who will go on to be members of the human resistance. This model is the T-X, a bleeding edge killing machine with chameleonic liquid metal skin and a more hidden weaponry than a Texan glove compartment. Essentially a Terminator that terminates Terminators, she’s put to the test when a classic “Arnie” model also turns up to protect John and Catherine Brewster, the woman who’ll become his future wife and therefore technically making the resilient cyborg a dating app far cooler than match.com could ever hope to be. 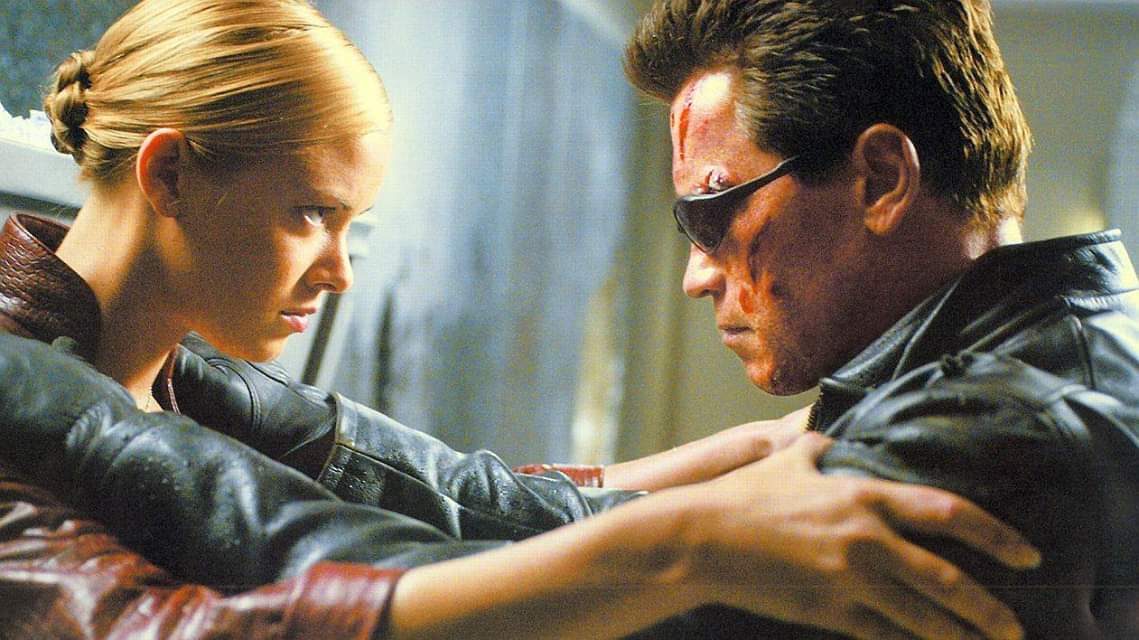 The Austrian accented appliance reveals that, yes, Judgement Day is still coming as the events from the previous movie merely delayed the rise of the machines (Hey! That’s the title!) and so John and Catherine cook up a plan to once again change-up the future while avoiding certain death at the hands of the T-X.
How effective you’ll think T3 actually is will be mostly based on how amusing you find the T-101 slipping on a pair of Elton John style star shaped shades as director Jonathan Mostow delves deeply into a semi-campy, self-referential tone that throws in random concepts that throw in random scenes that seemed to be solely designed to furrow the brow with confusion. For example, did the Terminator franchise really need a scene where the female T-X inflates her boobs to entice a victim or Arnie striding through a graveyard, firing at the po-po with a freakin’ coffin perched on his shoulder?
The actors seem a tad miscast too as Stahl’s John Connor is played simply too weasley to convince as the future saviour of mankind and Danes falls back too much on that wobbly-chin emoting she sometimes falls back on although both give their best try.
The Terminators fare better as Kristanna Loken gives Robert Patrick levels of glare as the T-X despite never really reaching the true level of menace that past robo-antagonists have achieved, but her many tricks and swiss army style weaponry make her mostly a worthy adversary against Arnie, who just seems happy to be there.
Despite some amusingly jarring gore (the T-X punching a hole through someone out of nowhere and steering a car through their torso is a definite WTF moment) there is a definite sense of the filmmakers trying to soften the harder edges of the franchise to entice a younger audience, with the showdown between the two machines feeling more than a super expensive bout of rock-em sock-em robots than the future-of-the-world-is-at-stake tussles of old.
However two moments yank T3 out of the mire of blockbuster predictably, the first is an utterly massive car chase that flattens buildings and obliterates whole streets despite only coming about 20 minutes into the movie (and therefore having no repercussions whatsoever) and the second is a daring closing 5 minutes that throws all the campy romping into sharp relief for a sobering and down beat ending that may eliminate any after-movie buzz but is admirable in it’s bravery.

Sporadically fun but ultimately too silly to hope to even stand in it’s predecessor’s shadow, the rust that ultimately consumed the franchise for the next few installments begin here.
🌟🌟