Sometimes fun is all you need. No big stars, no huge talent calling “action” (unless you count J.J. Abrams with a weighty producers credit, and I guess you should), just a cool concept, well utilised with a game cast and enjoyment is all but guaranteed.
Well Overlord, while lagging behind in pure scares when compared to 2018’s other horror releases, is definately fun.
Loud and furious, it’s amazing that with all the Call Of Duty undead themed DLC’s and other such Zombie/Nazi shit going on in the world of videogames (you could’ve renamed this film Wolfenstein and no one would been any the wiser) that it’s taken so long for this particular sub-genre to hit the multiplexes. Oh sure, in the world of direct-to-video there’s quite a few, the Outpost series and Frankenstein’s Army are just a couple (check out the latter for maximum weirdness) but precious few have ever reached the big screen, but with the first Captain America movie making World War II ripe for respectful action fantasy again, I guess it’s open season on diabolical Nazi doomsday plots. Whoopee.

Dropped behind enemy lines – in a magnificently chaotic scene that recalls Omaha Beach but with more parachutes – in order to destroy a radio tower that is instrumental to to the war effort, a company of soldiers are stripped down to a mere handful of members by anti-aircraft fire. Regrouping on the ground the survivors stumble upon a small French town under Nazi occupation, however something is more off than just the usual problems associated with occupation by a fascist regime. Under the radio tower, in the town church, heinous, hideous experiments are being performed on the town’s people in order to create a super stimulant that can raise the dead, strengthen up the living and guarantee that thousand year Reich that that angry shot dude with the ‘tashe was always banging on about. 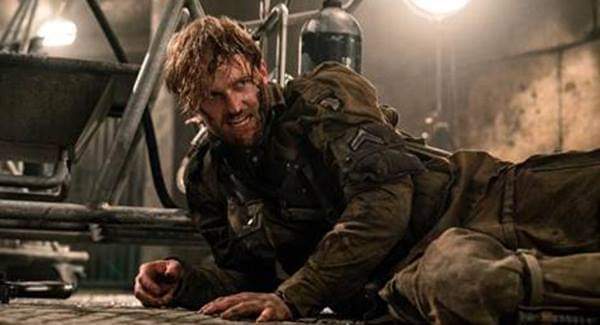 Even though the ad campaign went aggressively fifth gear on the horror elements, you actually get best results with Overlord if you treat it as more of a straight war movie with a decidedly off-kilter final third. There’s no hyper-gonzo mid film genre shift in the style of From Dusk Till Dawn (which what I was expecting/hoping for) and despite similarities in details with über-cult film extraordinaire Re-Animator (both feature a mystery compound used to jump start the dead that have body-popping after effects) there’s nothing here to match the craziness of the ferocious last half hour of that notorious 80’s gore classic.
Not to say Overlord doesn’t have it’s fucked up moments where it counts… a scene where you first see the effects of the drug in the attic of a small French house utilises some top notch body horror with quite the novel reconfiguration of the human neck with amusingly shocking results that might upset regular viewers of Agents Of S.H.I.E.L.D. Not to mention that’s one helluva face wound that guy has near the climax…

In fact, maybe if I wasn’t so well versed in gore cinema, Overlord would have held more gruesome surprises for me, but as it stands it’s still a very entertaining action/horror/war movie, pumped with energy and packed with wit.
In fact, you could say it’s a bit of all Reich…
🌟🌟🌟