Every couple of years the science fiction movie manages to launch a serious and thought provoking entry that attempts to snare a blockbuster crowd while aspiring to remain in the orbit of the art house aesthetic. Blame the mighty 2001: A Space Odyssey for this, a perfect melding of breath snatching spectacle and brain frying trippyness that has influenced every filmmaker that has ever wanted to tackle exploring the great beyond with a straight face. It’s not easy though, and it’s certainly not cheap: how exactly do you tailor a film which asks huge questions about the very nature of the human condition while trying to sell enough tickets to justify the scope of your vision? How do you not be Geostorm?
Others have tried and succeeded on various levels (Gravity, Interstellar, The Martian) and the latest to leave the launch pad is Brad Pitt’s Ad Astra (latin for “to the stars”), similarly deep introspection of the human condition with a sizable budget at it’s back.

Roy McBride is a stoic, dedicated astronaut who lives somewhat in the shadow of his heroic father, Clifford, who disappeared 16 years into a mission to find intelligent alien life past Neptune. Nearly killed in a massive power surge that causes untold death and destruction on earth, Roy is recruited to travel to space and seek out the most likely source: his father. Armed with an experimental device powered by anti-matter, it’s surmised that Clifford has survived out in the edges of our universe and has gone native in his desire to explore so Roy has to undergo a harrowing quest of his own which takes in everything violent border disputes on the moon to rampant paranoia on Mars to a brutal reality check in the orbit of Neptune in order to not only reunite with whatever kind of man his father has become but to reclaim some of his own eroded humanity.

To measure how navel gazey Ad Astra is from the brow burrowing metaphor of Solaris to the explosive razzamataz of Star Wars, James Gray’s movie predictably skews hard towards the former but has enough savvy to fling in some legitimately surprising action beats in amongst the self doubt and endless theorizing. An utterly left field animal attack during a rescue mission on board a research vessel strains credulity a tad, as does an accelerated space walk through potentially lethal debris but a mid-film, knock-down, drag-out buggy chase on the surface of the moon genuinely impresses with it’s stark brutality (Mad Max: Lunar Road anyone?).
What also impresses is the casual world building, from the soulless grey strip malls of the moon to the brutal, nihilistic, hellscape architecture of Mars (where else could you find Natasha Lyonne playing a motor mouthed receptionist), the further Roy gets from earth, the more insular and paranoid his journey becomes until you clock that not only is the director riffing on 2001 but is also drawing heavily from the hallucinogenic dread that lies draped over Apocalypse Now. The performances get weirder, the paranoia becomes more oppressive and the visuals get more avant garde as Roy’s journey to his father leaves him more and more disconnected from everything around him.
Pitt give a quiet, internalized performance, not unlike the one Ryan Gosling gave in First Man (are ALL astronauts emotionally constipated earth haters who blank their own wives?) which compliments the array of glorified extended cameos around him – no one else is in the film barely longer than 15 minutes at a time in order to heighten Roy’s alienation. Although you can’t help but notice what with a similar concept and both Tommy Lee Jones AND Donald Sutherland lurking about on the cast list you have a sinking sensation that we’re only one Clint Eastwood away from have a Space Cowboys sequel but thankfully we are spared such a reunion. 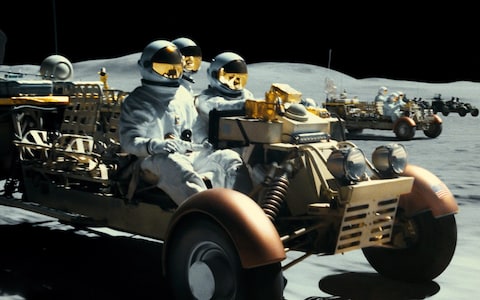 Stark, cold but ultimately rewarding, Ad Astra is trying to be different things for different people and may frustrate those looking for somewhat less substantial thrills, but it ultimately succeeds well enough in it’s main mission to make it a space faring journey worth taking. But probably only the once…
🌟🌟🌟🌟