By the 1990’s, Joe Dante’s output wasn’t what it should have been… starting his career with suprisingly his intelligent schlock monster opuses Piranha and The Howling, he’d hit his peak under the wing of Steven Spielberg with the magnificently spiteful family film Gremlins which cheekily lit a fire under that most heartwarming institutions – the christmas movie. However, shifting gears from horror satire to Spielbergian family movies meant that even though his subsequent flicks Explorers, Innerspace and The ‘Burbs were fun, inventive and endearingly perky, the sheer cultural impact his earlier films had made was on the wane. In fact a suspicious type might consider that maybe Dante’s films may have the curious problem of not only being too smart for 90’s audiences but were probably way ahead of their time.
Proving this little theory of mine is the tragic underperformance of Gremlins 2, Dante’s long overdue sequel to his earlier smash which brings the floppy-eared, cackling, reptilian shits to the big city.

Years after the impish little bastard leveled the picturesque little town of Kingston Falls, Billy Peltzer and his sweetheart Kate have moved to New York where they both struggle to make ends meet working in the state of the art building owned by billionaire Daniel Clamp (sic) but an adorable, saucer-eyed face from their past is about to arrive back into their lives in the fuzzy form of Gizmo who has also found himself, by a peculiar quirk of fate in the genetics wing of the very same building.
Before you know it, after an unfortunate but inevitable encounter with a spot of H²0, Gizmo spawns a quartet of trouble making Mogwai in the form of the terminally hyper Daffy, clutzy duo Larry and George and the viscous Mohawk who immediately set about trying to score themselves an after midnight meal.
Successfully transformed into full fledged Gremlins and multiplying like flies thanks to a handy sprinkler system, things somehow goes from worse to worse when the murderous little twats find their way into the genetics lab run by the disease obsessed Dr. Catheter and start enthusiastically fucking with their DNA producing all manner of deliriously lethal mutants and cross breeds for Billy and Kate to deal with.

Ditching the hilariously mean pseudo comedy horror leanings of the orginal movie for a recklessly paced full on monster movie spoof comes with it’s fair share of problems but it’s also fair to say that this New Batch is a magnificent watershed moment in puppeteering genius mere years before the popularity of CGI put a temporary kibosh on such artistry. Taking over creature duties from Oscar winner Chris Walas is Oscar winner and legendary effects demigod Rick Baker who unleashes his vast talents in the impressive attempt to try and make each and every Gremlin appearing in front of the camera different. On top of the four different main villian Gremlins (and their Mogwai forms) there’s three different species of normal Gremlin plus there’s the DNA altered mustang’s which include a Vegetable Gremlin, a Bat Gremlin, an Electro Gremlin, a Female Gremlin – shit, there’s even a fucking Phantom Of The Opera Gremlin – but by far the most entertaining is the Brain Gremlin. Juiced with “Brain DNA”, sporting specs and formal wear and pontificating with the vocal chords of actor Tony Randall, he’s a magnificent character, whether using his grey matter to boost the abilities of his Gremlin breathen or indulging in an actual sit-down interview where he expresses the things his species are looking forward to experiencing now they’re in the Big Apple (“There’s a lot of street crime but I believe we can watch that for free.”).
Almost as impressive as the special effects is the vast array of in-jokes that is so dense in number, even seasoned filmgoers might miss them all on a single viewing (Lenny and George are modeled after Lennie from Of Mice And Men and Edward G. Robinson respectively) that are fired maniacally into the audience at a rate that could match comedy heavyweights like Airplane or The Naked Gun. Virtually every square footage of the screen has something going on and it’s usually pretty damn funny and at times veers wildly into full on Looney Toons style meta where at one point the “film” breaks down only for Gremlins to throw up shadow puppets on the screen.
Maybe in the days before Scream or Deadpool made such humour universally popular, such organised chaos running roughshod over a rubber reality was a little too much for a 90’s blockbuster audience to stomach and to be brutally honest, any character that doesn’t have big ears and is radio controlled by cables that run up their butt (ie: Billy and Kate) are reduced to exposition spouting straight roles and only the cream of the overacting crop (John Glover, Robert Picardo and a returning Dick Miller as Mr. Flutterman) can hope to keep their heads above the lunacy.
Thankfully, thanks to such high profile gigs such as Netflix’s Dark Crystal series and Disney’s Star Wars output is starting to get practical puppetry back into the mainstream where it belongs and time has been kind to Gremlins 2 in general. 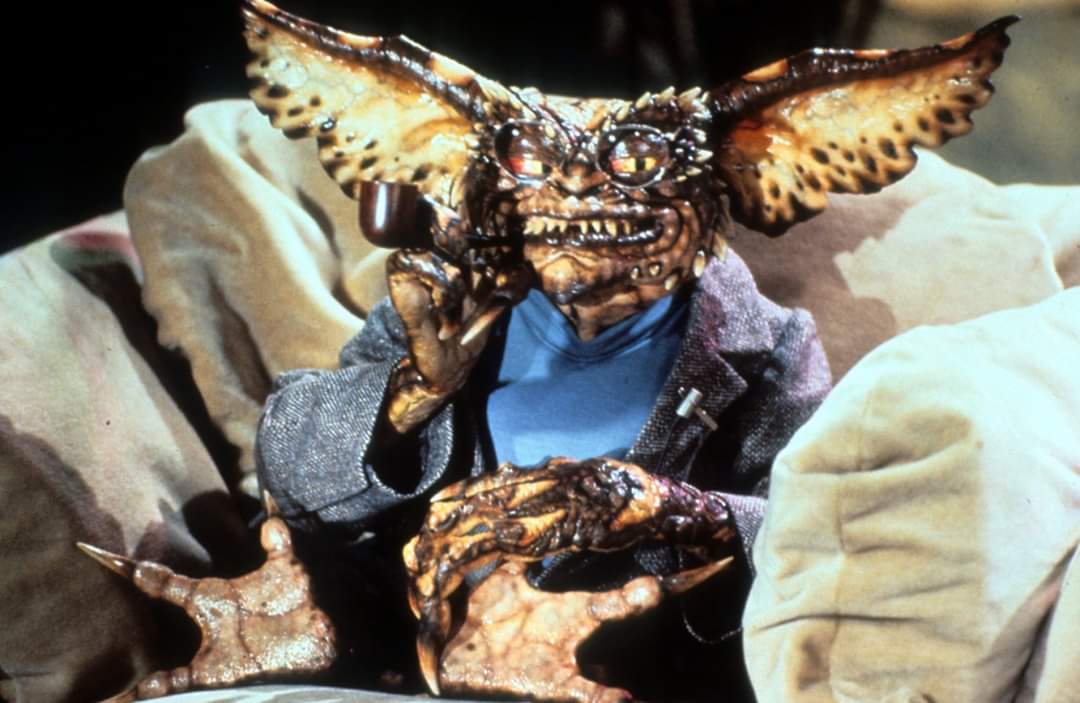 So for a slice of mean spirited fun (Gizmo is amusingly brutalized pretty much from the first scene) and a genuine lump of cartoon anarchy, this is a definite must to unearth and rediscover.
Just do it before midnight though, yeah?
🌟🌟🌟🌟