I’ve mentioned elsewhere on this site about the difficulty hollywood has had in trying to visualise the unearthly works of Howard Phillips Lovecraft (H.P. to his friends if the grumpy git had been more forthcoming), whose indescribable horrors and unpronoucable eldritch gods have remained only hinted at by movies in general and whose boundless imagination was only matched by his highly questionable political views.
Stepping forward out of the unearthly mist comes Richard Stanley, a South African director, who dresses like a cowboy alchemist and who hasn’t made a full length feature in over 20 years; but who speciality in trippy, hallucinogenic genre work (Hardware, Dust Devil) makes him born to this kind of project. Coming back to filmmaking after a self imposed exile after the excruciating experience of being dumped from the disastrous 1996 production of The Island Of Dr. Moreau, Stanley has decided to tackle some of the author’s more “out there” themes with Colour Out Of Space, a deeply hallucinatory, utterly gonzo, wedge of sci-fi cosmic horror – but he isn’t attempting it alone…
He’s brought Nic Cage with him…

Close your eyes and picture the average American family and chances are you’ve pictured the Gardeners: patriarch Nathan is a struggling alpaca farmer, matriarch Theresa is struggling to keep her business together despite a mastectomy and shitty wifi, daughter Lavinia is a practicing wicca, son Benny likes to get stoned with the local hermit and youngest Jack just likes to sit and stare…
Ok, so they’re not exactly the fucking Waltons, but this eccentric unit start to get a whole lot stranger with the arrival of a meteorite that plunges into their back yard and emits a colour the likes of which the family have ever seen (actually a deep shade of pink). Eventually the essence of this example of otherworldly flotsam and jettson starts to affect first the wildlife and fauna around the impact site and then the very DNA of the hapless Gardeners themselves as time and reality seem to bend around them hinting at a horrible, psychedelic fate. 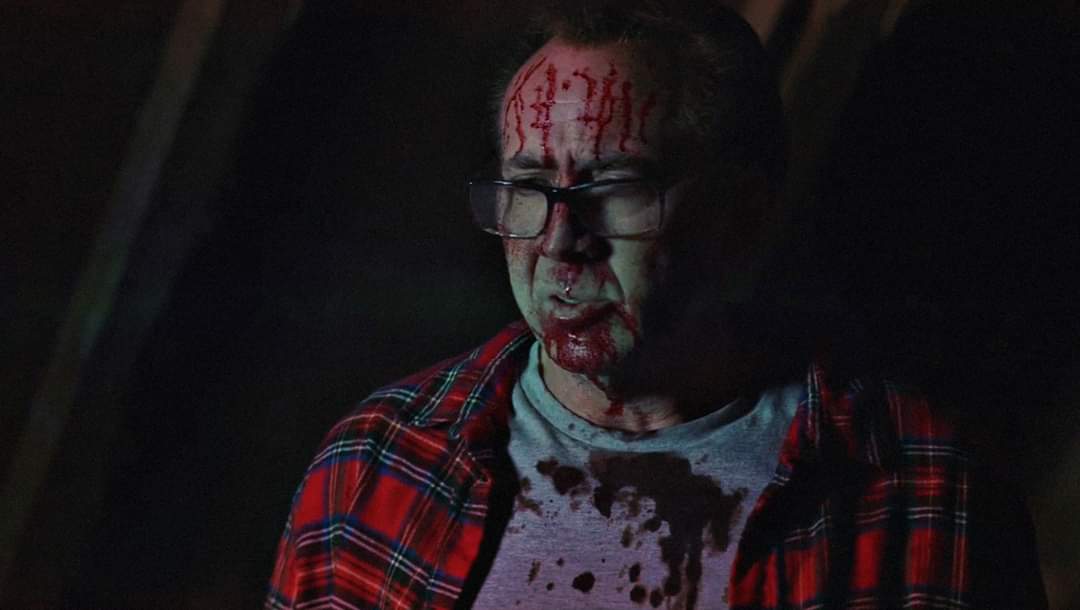 From the same studio as the equally kaleidoscopic, rage-Cager, Mandy, Colour Out Of Space seems to be yet another sign that Nicolas Cage has finally found the perfect output for his particular kind of full-on, scenery chewing performance and anyone desperate for more examples of the actor spectacularly losing his shit will be extraordinarily well served here.
Much like Mandy, the movie actually rises to meet his character’s mania instead of being overwhelmed by it, churning out retina singeing images as Cage’s mild mannered wannabe farmer loses his mind.
Switching to a completely different accent when blowing his mental stack (his disapproving father’s), some might consider his performance too overwhelming to be taken seriously (he farms alpacas for fuck’s sake!) but Stanley is smart enough to lean in the rich vein of ludicrous that pulses in virtually every scene to counter and even enhance the vast amounts of crazy, mining suprising, frequent laughs out of the genuinely chilling body horror.
The rest of the cast perform admirably in the face of such delirious “fucked up-ness” with Joely Richardson looking worryingly brittle as the recuperating mother and Madeline Arthur impresses as a daughter repressed by her well meaning family who uses her witchcraft as a sense of identity. And how can you not love a movie that casts Cheech And Chong’s Tommy Chong as drugged out old dude living in a shack in the woods?
But all this is just cherry on the cake because I’m here for the body horror – a horror trope I personally have been obsessed with ever since I first saw The Thing as an impressionable child – and it certainly doesn’t disappoint with a particular malformed creature (I won’t divulge which) crawling into you psyche like a tick – and wait until you see what the Colour does to the alpacas!
Not technically the first time someone’s taken a crack at this story (the story was filmed as The Curse in the 80’s and Alex Garland’s Annihilation certainly bears more than a passing resemblance) it’s by far the closest to the author’s work which also contains an absolute ton of easter eggs to the sizable lore Lovecraft is famous for (the shade of the Colour itself is reminiscent of the bright pink used in From Beyond).
So will this adaptation stoke up a thirst for more Lovecraft? Stanley himself is hoping to next adapt The Dunwich Horror, a tale at least as twice as mouthwateringly batshit as Colour, and creatures reminiscent of the author’s gargantuan Deep Ones have already shown up in the final act of last month’s Underwater, not to mention the 80’s throwback apocalypse of 2018’s The Void – so maybe?

Obviously, some might not know WHAT to make of this movie and will disregard Colour as a great big mess but for those open to the experience you get the overdue return of a visionary, you get a clutch of gooey monsters AND you get an unfettered full strength Cage performance all in one sitting for a cinematic bad trip that well worth the journey.
Colour me happy.