Sometimes what you’re doing isn’t anywhere as important as how you do it and nowhere is this more apparent than the plot of a modern day action movie. Exploding onto Netflix with the force of a boxing glove filled with C-4 is the fairly derivative, but utterly awesome Extraction; a film that’s essentially a shameless mash-up of Tony Scott’s Man On Fire and the forgotten Russell Crowe/Meg Ryan vehicle Proof Of Life.
Having “extracted” (see what I did there?) the plot from other movies, the film is then free to employ the kind of dizzying, artery spraying, violence seen in Gareth Evans’ two Raid flicks to create possibly the finest action movie ever to grace the world conquering streaming platform to date.

As I just mentioned, the story of Extraction is fairly standard. Ovi, the bright, innocent son of India’s biggest drugs lord is kidnapped by Bangladesh’s biggest drugs lord in order to take advantage of his rival’s current imprisonment and destabilise his empire.
Enter fucked up, black market mercenary Tyler Rake; an Aussie neck breaker who comes burdened with the typical broken marriage/dead kid deal that leaves him perfectly ok with accepting high paying, but blatantly suicidal jobs. You can tell he’s been accepting them for a while too as his comrades keep insisting on saying deep shit to his face like: “You’re hoping that if you spin the chamber enough times you’ll catch a bullet.”
Casually ignoring the usual dime-store psychology, Tyler heads off to Dhakar, liberates Ovi in EXTREMELY bloody fashion and then realises that a double cross is afoot when his small team is promptly demoted to dead people by a lone gunman. It turns out that this man is Saju, the head of security of the drug empire that Ovi’s father controls and he’s been ordered to save the boy himself so that the kid’s asshole won’t have to pay a ransom OR fee (and you thought YOUR dad was cheap).
Battling each other for the same goal – but for different reasons – the two also have to content with the highly corrupt Bangladeshi police force, puppeteered by a drug baron so evil he has pre-teen, street urchins hurled off roofs for his amusement and the fact that virtually every ally they have in the surrounding area has been seduced by the sizable ransom that’s being offered. As Tyler inevitably bonds with his young charge and his wounds start steadily mounting up, he starts to realise that even getting Ovi home may not be the best thing for the traumatised boy, but – in an over populated city where a sizable chunk of the population wants to kill the shit out of you – does he really have any other choice?

So to re-address the heavily armed elephant in the room, Extraction’s biggest failing is that you’ve seen this plot dozens of times before and you’ve seen it done better. It’s not that Extraction’s story (written by Avengers: Endgame’s Joe Russo no less) is poorly executed, it’s just typical of countlessly similar movies made repeatedly by numerous countries around the world. But where Extraction “extracts” itself from the heard (look! I did it again!), is in it’s magnificently brutal action which gleefully pulls no punches and is majestically staged.
This is thanks to director Sam Hargrave who has moved on from stunt co-ordinating Captain America: Civil War and Avengers: Endgame, to helming a film where Chris Hemsworth plays a man named Tyler Rake who at one point – I shit you not – fucking murders someone with an actual fucking rake. The action beats are flawless, suprisingly varied and hugely ambitious, pulling off a devastating, extended, Atomic Blonde-esque “single take” which takes in a car chase, a fight-or-flight through a block of flats and an absolutely vicious one on one brawl where Rake and Saju essentially beat on each other with cars… It’s palm-sweatingly tense stuff and you do actually start to lament that even during these COVID dusted times in which it’s released into homes on lockdown, it’s a real shame that some of the most uncompromising action we’ll probably see all year will never see the light of a cinema projector. For example, a scene where someone pops their massively broken nose back into joint complete with a gout of blood hitting a sink would’ve gotten a major reaction from an audience allowed to sit within two meters of each other…
Chris Hemsworth (also producing), shorn of his Asgardian hammer and allowed to actually use his real Aussie brogue to great effect, is an absolute fucking star and somehow makes this damaged bastard relatable despite his violent nature and his shitty tattoos, simply by allowing his planet-sized charisma do the work while he’s beating/stabbing/shooting the life out of anyone that comes within 5 feet of him. Never is this more evident than during a scene where a gang of barely teenage street punks try to take Ovi only to be dubbed “the Goonies from hell” by Tyler as he spectacularly slaps the shit out of them.
Everyone else works great (including a small role for Stranger Things’ David Harbour) and even though the endless, gruesome – yet exhilarating – violence may put some people off, I still stand by my claim that this is the best stone cold action thriller Netflix has ever produced and that it’s director could be a new leading light in action cinema that’s embraced the genuine aesthetic of The Raid, or the John Wick movies. 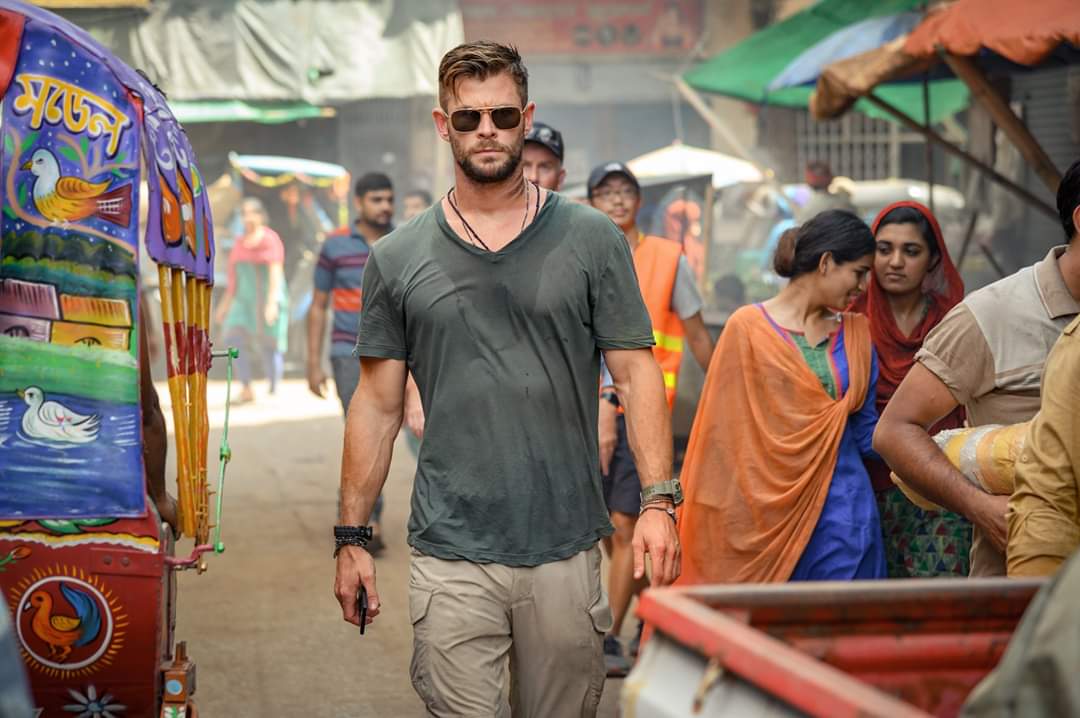 So if you’re in the mood for some double hard bastard action; just pop over to Netflix and extract yourself a thriller that’s slightly filler, but totally killer.