Immortals wandering among us while striving to avoid rubbing their death-resistant existence in the faces of us “normies” isn’t exactly a new concept but new attempts seem to pop up periodically in an attempt to put a novel spin on the notion of an unkillable loner.
Of course, the most infamous incarnations of heroes who can heal from any wound (as opposed to, say, ducking) are Wolverine from the X-Men or Christopher Lambert and his odd accented brethren from the Highlander series but Netflix’s The Old Guard asks the question what would happen if the beings from Highlander stopped swinging their bloody great swords around and instead dipped their immortal tooties into a spot of black ops.
The answer suprisingly seems to be: not much…

We are introduced to Andy (short for Andromache, obviously) ans her three companions, who all are death-resistant and have lived abnormally long lives. They have dedicated their existence into trying to make the world a better place by forming a black ops mercenary team who undertake apparent suicide missions for good causes (think the Weapon X team from X-Men Origins: Wolverine but if all the members had Logan’s regenerating party trick) but presently Andy is undergoing a crisis of faith. Her belief that the world isn’t going to get any better no matter how many bad people they put in the ground is only compounded by the fact that a pharmaceutical company is trying to catch them in order to use them for study (obviously no one there has seen Deep Blue Sea) and is ready to turn it all in.
Hope arises in the form of Nile, a soldier in Afghanistan who discovers that she is immortal by the rather extreme method of having her throat slashed open on duty and then healing up without a scratch in under 24 hours. As a bonus of being immortal also includes having visions of other members of your own kind, Andy heads of to collect Nile and induct her into their fraternity of ever-living ass kickers and the group begins to teach her the ways of their kind. As a former CIA agent tracks them for the unscrupulous pharmaceutical company who definitely aren’t used to taking no for an answer, Andy starts to suspect that her regeneration powers may be on the wane at the worst possible moment. Can reluctant immortal Nile pick up the slack before disaster strikes these centuries old warriors? 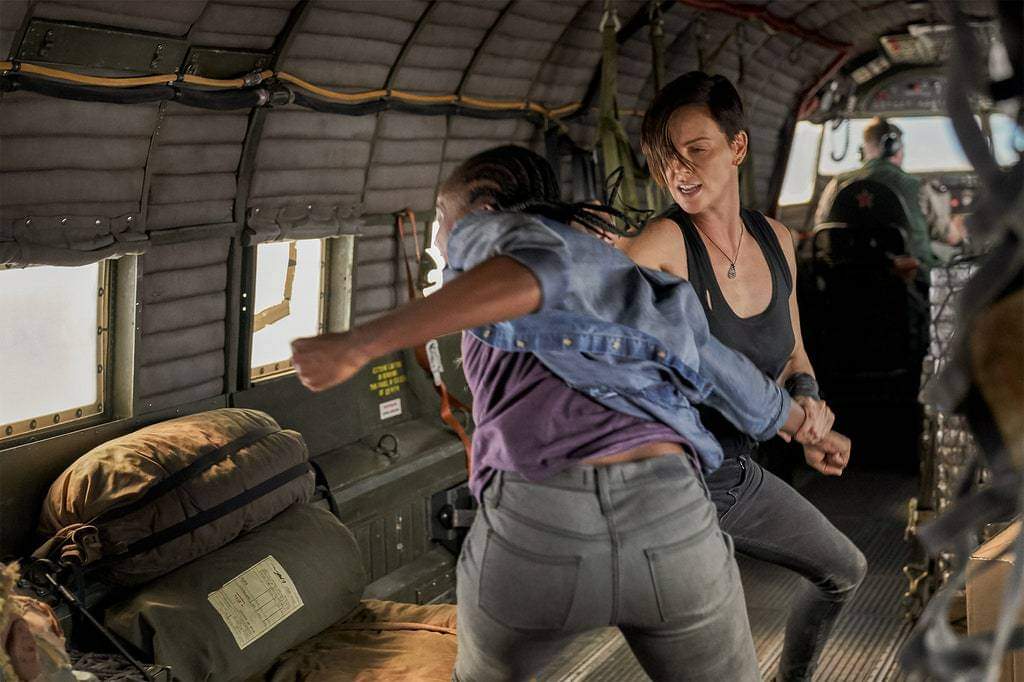 Based on the comics by noticable D.C. scribe Greg Rucka, the movie version of The Old Guard is most noticable for scooping up a bunch of ideas from other sources, blending them up into a frothy margarita of superhero tropes and then leaving it out in the sun for hours while doing nothing with it. If the film is trying to be an accurate representation of living forever by having the whole thing plod along morosely while all the noticable events bleed into one another then I guess it’s an ironic success but there are literally at least a dozen other films that take this idea and do it far better than this snooze-fest (*cough* Logan *cough-cough*).
However, credit has to be given to Charlize Theron for busting out another worthy action movie performance as watching her Xena: Warrior Princess her way through countless battles in history proves to be a genuine kick and you wish the film included more of her legitimately interesting past instead of focusing on her gloomy present. That being said witnessing the Oscar winner shrugging off hollow points, smashing back vodka like it’s an Olympic sport and hacking up scores of troops to a soundtrack of wailing electro-pop is still good value for money and the scenes with her recruiting Nile (a spunky Kiki Layne) also nicely pick up the pace but too much of the film is taken up with the story spinning it’s wheels on seemingly endless scenes of our main cadre of characters chiefly being sad (sad face emoji). All the progressive aspects of the script (female leads, gay and pansexual relationships) are somewhat undone by the fact that the film doesn’t actually seem to be about anything as beyond the set-up and them repeatedly avoiding capture, story has all the drive of a remote controlled car with a leaky battery. Director Gina Prince-Bythewood (Love & Basketball, The Secret Live Of Bees) manages to give the film a nice, classy sheen and isn’t afraid of showing the nastier aspects of regeneration (compound fractures, squishy bullet wounds) but the film instantly collapses thanks to that old speed bump of a plot issue that if your characters cannot die, where exactly is the drama? Dropping in the rather random issue that one day, an immortal simply stops regenerating just like that doesn’t really help to counter the problem and even when this does actually occur – said character still manages to battle on for another 20 minutes despite sporting a bullet in the guts.
Despite some zippy but forgettable action scenes, the film also chooses the unwise path of wasting awesome actor Chiwtel Ejiofor in a part that may eventually become a sort of Alfred-to-Batman sort of role if the follow up occurs that this film is desperately straining for. In fact a end of film sting hints at the sort of plot that this film could have sorely needed as for most of the runtime it doesn’t seem to be about anything.

Dull when it should be pounding your pulse, this is yet another lack luster Netflix action movie with fantasy overtones that ends up being stunningly forgettable in an era where movies are becoming ever more disposable and the idea of undying has been, ironically, done to death.
🌟🌟