There’s a saying that goes: those who do not learn from history are doomed to repeat it. It’s a wise saying as sayings go and it usually goes hand in hand with discussing the more distasteful acts in our species; primarily the inhuman acts that spawn in the face of war…
However, without wanting to sound disrespectful, it’s also a saying that should be lashed to the making of war MOVIES, too.
In 1998, Steven Spielberg unleashed Saving Private Ryan upon the world, it’s visceral depiction of battle during World War II forever doing away with the glib, back slapping, boys-own adventures war movies usually were in the 60’s & 70’s. In fact the only I can think off that was released since that even remotely treated war as an exhilarating romp, was the first Captain America film and even that barely had a legitimate Nazi in it…

This brings us to Midway, Roland Emmerich’s retelling of the battle of the same name that took place between America and Japan six months after the devastating attack on Pearl Harbour.
Starting with the attack, continuing the subsequent retaliation bombing of Tokyo and ending with the titular battle which changed the face or the war, we follow several key characters as they pick their way through these vital moments in history leading with Dick Best, a cocky daredevil pilot who, like many of his serving countrymen, fumes at the attack on Pearl Harbour which leaves many of his friends and comrades dead or hideously wounded. Meanwhile military intelligence bod Edwin Layton, who blames himself for not being able to convince his superiors that the bombing of “Pearl” was imminent, doubles down to work out what the Japanese may be planning next under the reluctant command of Admiral Chester W. Nimitz, drafted in to ensure that America doesn’t get caught with it’s pants down again.
As the super powers circle each other around the Pacific, metaphorical fangs drawn, Best tries to keep his squadron together as the deciding battle looms, everpresent on the horizon.

Midway apparently, was a dream project for Emmerich (aka. the bane of national monuments around the world) which is somewhat odd considering it’s an extraordinarily bland film. Besides, it’s a tale that’s been told a few times before too with an attempt in 1976 and, more famously, Michael Bay’s disastrous Pearl Harbour which covers the most of the same subject. The kicker is this however, Bay’s movie made back in 2001 actually, somehow features better visuals than Emmerich’s version despite both having virtually identical shots – something that is utterly inexcusable considering the money spent on it. Also, when your pulse pounding visual effects isn’t pounding anywhere near as many pulses as they should be, all you’re left with is your cast and script to carry you through and Midway underachieves here as well.
War movies are usually know to contain sprawling all-star casts. Well, in this case, Emmerich has assembled an all-decent cast loaded with dependable and recognizable faces, but saddles them with a script so one note and colourless, even the most hard working actor struggles to make anything of their role. When have you known Woody Harrelson, Dennis Quaid or Patrick Wilson struggle to make an impact in a movie – and yet here they are given precious little to sink their teeth into aside from coldly stating war facts, spouting enemy hyperbole or chewing on such hokey dialogue as: “Men like Dick Best are the reason we’re gonna win this war!” while keeping a straight face.
Speaking of the lead of this film, I’ve appreciated Ed Skein in many a movie in the past but here he seems rather out of his depth. Locked in a life or death battle with an unwieldy accent that causes his mouth to flap like a cat flap in a hurricane you could turn the sound off and you’d genuinely be hard pressed to tell whether he’s mouthing actual dialogue or simply chewing his trademark gum.
The rest of the cast simply sink beneath the waves, be it Mandy Moore’s textbook war wife or anyone of Best’s interchangeable crew, none of whom look even remotely believable (if Nick Jonas’ weak attempt at a moustache is actually real then he REALLY needs to shave and never grow one ever again).
It seems that Emmerich is trying to make a good old fashioned war movie where ham fisted dialogue goes hand in hand with uncomplicated politics (the Japanese are portrayed as noble and honorable but it still takes pains to remind you how many Chinese they slaughtered) but as I stated earlier, war isn’t really that simple…. 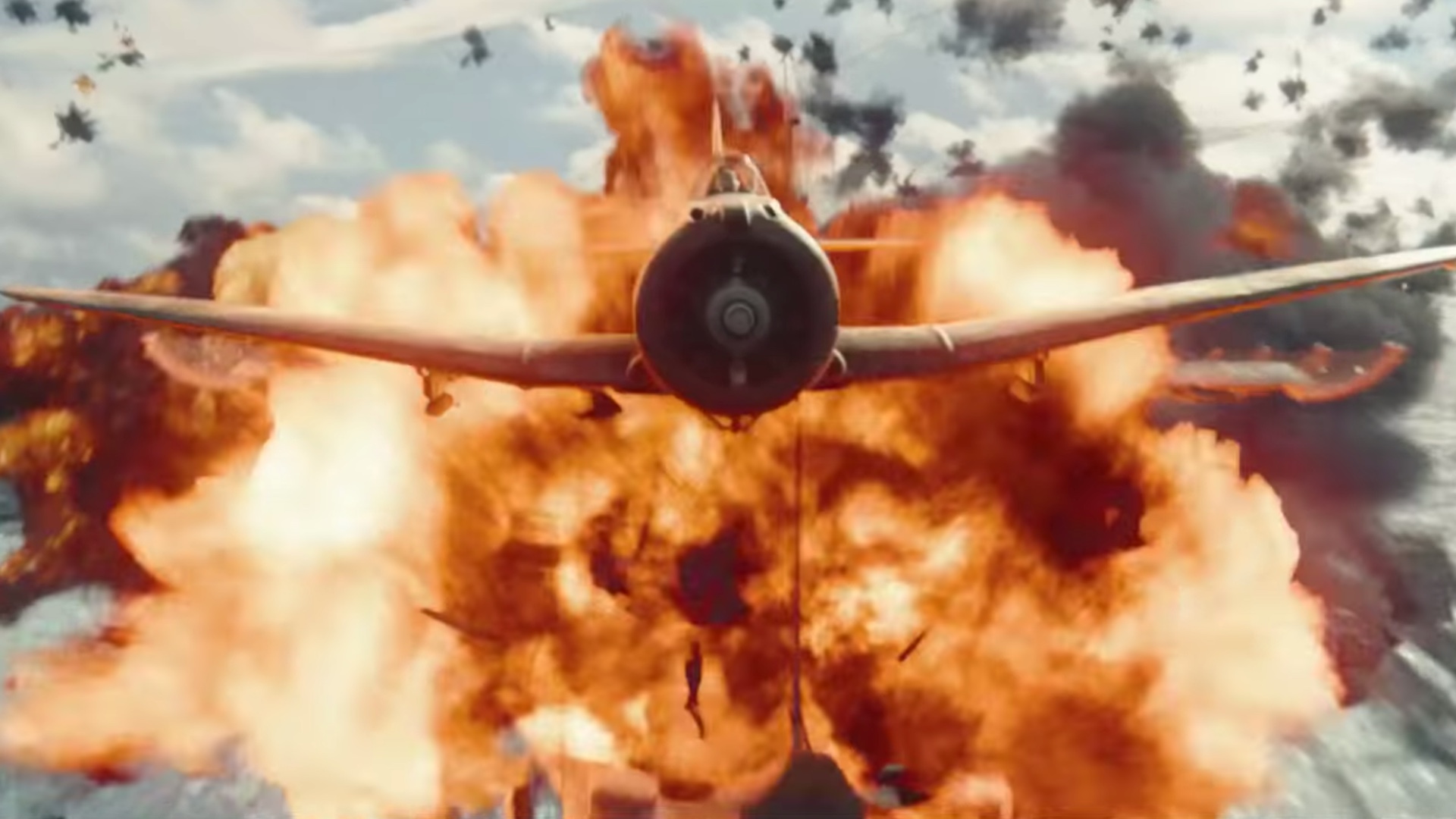 Despite a load of good intentions and a few rare new ideas (holy shit, filmmaker John Ford is portrayed in this!) Midway is much like an explosive carrying war plane and the war torn battleships they’ve targeted to attack.
It’s primed to bomb and will sink without a trace…