Over his fifty-odd year movie career, old Jimmy Bond has faced many threats, Goldfinger, Jaws, a Madonna cameo… But the biggest threat he had in front of him during the release of his 24th official movie seems to be exactly how well the 23rd was received by the public.
After all, if Casino Royale was Bond’s Batman Begins and Skyfall was The Dark Knight (we’ll ignore the tonal hiccup of Quantum Of Solace for the moment) then logic dictates that in this comparison that I’ve tried to cram down your throat a couple of times now, Spectre should line up to be The Dark Knight Rises.
This prophetic line of franchise matching proves to be eerily accurate as both The Dark Knight Rise and Spectre both suffer from having to follow up movies that transcended their respected franchises and found huge success with people who usually wouldn’t even go for that sort of movie. Both are admittedly overlong (a 2 1/2 hour plus running time would’ve been unthinkable in the Broson era) and both seem to want to put a cap on a contained story with an actual ending which seems to fiercely contradict what fans wanted from their iconic heroes.
To be fair to Spectre, it’s not a bad film in the least (it’s certainly way more focused than that black sheep of the Craig era; Quantum Of Solace) it’s just trying too hard to be Skyfall × 2 when it should be content to be merely Skyfall 2.

After adding some genuine death to the Day Of The Dead festival in Mexico City while dangling from a chubby helicopter as it twirls and loops like a moth with a serious case of lamp envy, Bond finds himself on the trail of a mysterious organization thanks to a posthumous message from the previous M. So after a credits sequence featuring Sam Smith’s rather shrill, but ok-in-context, theme song and visuals that contains enough nude bodies and tentacles to make a hentai fan sweat, 007 sets out to find out who these guys are when all he had to do was check out the title of his own movie for a major clue. This, predictably, gets him in hot water with current M, Mallory, who unsurprisingly isn’t fond of having his agents swan off around the globe on missions they’ve created themselves – especially when a new, privately backed, intelligence service is about to go live which will mean unsurpassed surveillance across the entire globe therefore essentially making spies a thing of the past.
Thanks to his usual technique of seduction and assassination (almost simultaneously in this case), 007 stumbles onto Spectre, a nefarious shadow organisation that essentially controls things behind the scenes via very dodgy means like terrorism, and finds that the man at it’s head is someone directly related to his past. It turns out that Spectre has had it’s tentacles in every scheme that Bond’s dismantled over the years and that’s why the secret agent has been weathering such loss since he got promoted to 00 status. Le Chiffre, Quantum and Silva turn out to all have been agents or sub-divisions of the titular entity – which makes you wonder what kind of union Spectre must have – and because of his meddling, Bond is a high target. Teaming up with the psychiatrist daughter of a past operative, Bond strives to bring down Spectre once and for all while avoiding the bludgeoning fists of brick shithouse sized henchman Hinx and the master plan of the architect to all of his pain: one Ernst Stavero Blofeld. 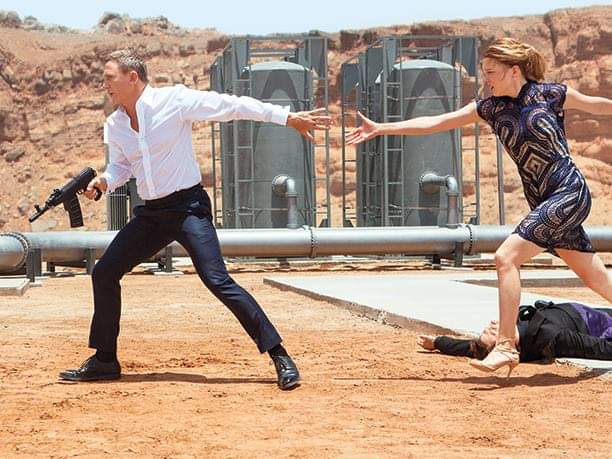 Ok, first good news. A lot of the things that made Skyfall so good are still present and correct here thanks to returning director Sam Mendes who once again takes Bond into interesting areas both visually and character based. Take the Day Of The Dead prologue for example which may be the most stylish set piece in Bond’s long history as the film begins with an audacious “single” take that sees us follow James from the bustling streets up to the roof tops of Mexico as he goes about his mission.
Also back, is the family-like relationship of Bond’s co-workers M, Q and Moneypenny (all respectively played by Ralph Fiennes, Ben Whishaw and Naomie Harris) who’s mixture of impatient barbed comments, yet undying loyalty to Bond really keeps thing ticking along nicely during the quieter scenes. In fact, after reintroducing such aspects back into the franchise with Skyfall, the filmmakers enthusiastically dump more in such as a tricked out car, needlessly complicated torture and a villainous henchman (the impressively wide Dave Bautista) who even engages Bond in a jaw droppingly brutal spot of fisticuffs on a train (Bond’s brawling on a train again! He was AWAYS beating the shit out henchmen on trains back in the day!).
Speaking of Bond, Daniel Craig still manages to doggedly mine the character for empathy and dimension for all he’s worth and while the film ultimately has less to say than Skyfall or Casino Royale, in the pantheons of Bond actors surely Craig’s broken Bond will stand as by far the most interesting.
The problem that Spectre has is that in it’s single minded mission to top Skyfall, it inevitable falls far short. The script contorts itself into knots trying to “retcon” and muscle the plots of the previous three adventures into Spectre’s plot and it just feels unconvincing and forced in the more realistic world that the character now lives in. It’s truly odd to describe a basic plot twist as farfetched in a franchise where a hitman assassinates people with his teeth but Blofeld’s claims that he’s been controlling EVERYTHING just doesn’t hold that much water and suspension of disbelief is suprisingly hard.
Also, even though the famously loquacious Christoph Waltz seems to have been born to play a Bond villain (or in this case, THE Bond villain) he remains disappointingly and decidedly un-threatening and his final plans and capture, while making scene thematically, seems oddly small fry for a man who can manipulate the world to his own ends.
It also doesn’t help that Bond seems to be able to buzzsaw through all of Blofeld’s guard’s like he’s playing Goldeneye on the N64 on the easy setting.

As the film starts to groan under the sheer weight of it’s own bloat, a light appears on the horizon… after all Spectre’s climax seemed oddly trite and un-earned back in 2015 which put even more strain on the over-taxed plot, especially as with every passing year it seemed like it was Craig’s final outing as the over-sexed spy. Yet with one last ride (phrasing… ) coming down the pipe (PHRASING!) with No Time To Die, it feels like a lot of pressure has finally been taken off this 24th episode to hastily tie things up and maybe history will be kinder to an entry that only wanted to live up to it’s older brother…
🌟🌟🌟