I think it’s safe to say that Rob Zombie’s crack at John Carpenter’s timeless slasher template was not all it could have been. Trying to cram his usual sensibilities into the pared down leaness of Halloween (or vice versa) led to a somewhat disjointed experience in which every change or addition he made to the original material ended up being both intriguingly interesting but also wildly unnecessary. It also seems fair to say that the multimedia author’s usual 70’s grindhouse style (complete with different film stocks) with additional staggering on-screen brutality sat at odds with the slickness-on-a-budget and bloodless chills that Michael Myers debut outing achieved with it’s revolutionary steadycam work and subtle precision.
It also didn’t help that literally 78% of the film’s characters where deeply unlikeable shitheels but that’s neither here nor there.
Trapped in the shadow of the very film he was trying to remake, Zombie seemed creatively handcuffed at every turn and therefore unable to deliver the full on Halloween/Rob Zombie product he so obviously wanted to deliver.
Luckily (although I not entirely sure for whom – certainly not the residents of Haddonfield), the Halloween reboot made enough cheddar to give Zombie another crack at making Michael Myers and the world around him look like one of his own album covers but this time on his terms.

It’s been a year after Myer’s assault on Halloween left multiple people in various states of dead and survivor Laurie Strode still bears the scars of that night both inside and out. Still oblivious to the fact that she and Michael are brother and sister she is plagued by extraordinarily traumatic nightmares of that night that have her screaming herself awake but generally she’s managing to deal even though All Hallow’s Eve is right around the corner. Of course Michael has survived that minor inconvenience of being shot point blank in the face and has been essentially been living wild in the fields of Illinois, stealing livestock like a gargantuan Fantastic Mr Fox and waiting to be triggered by visions of his dead mother. Sure enough, when Halloween rolls around again, Michael pulls back on his weathered, white mask and heads back to Haddonfield to finish what he started, but unbeknownst to Laurie, shifty psychologist Sam Loomis – who has built a career off being Michael’s doctor and surviving his earlier assault – has released a new book which lays the relationship between the killer and his victim bare. With Laurie in an extremely self destructive frame of mind and utterly unaware that her 7 foot tall serial killer brother is cutting a swathe of slaughter directly toward her, is there a danger that Michael’s sickness could infect her too? 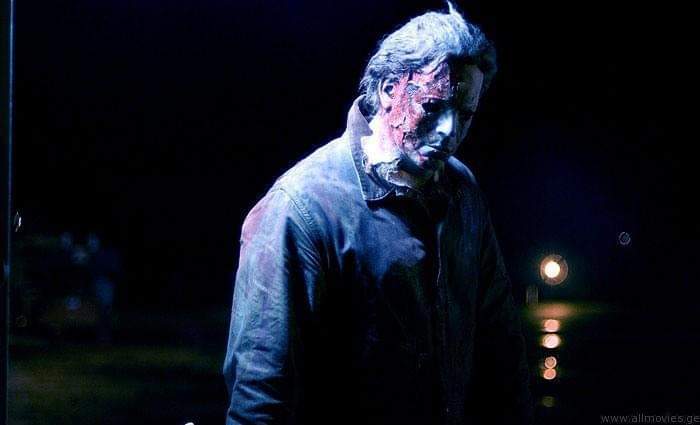 Zombie’s second stab (pun intended) atvthe life and times of Michael Myers is somewhat sneered at by fans but I’ve always felt there’s a more of a sense that the director, now freed from slavishly following John Carpenter’s path, is having more fun and is able to put more of himself into the film in general. For example, Michael looks more like the director himself than he did in the first film plus Laurie’s surreal nightmares and Michael’s visions of his dead mother add a layer of the bizarre that the Halloween franchice has never attempted before. Plus the level of minutiae the director brings to the violence is disturbingly tactile with a montage of doctors tending to Laurie’s wounds directly after the first movie ended, pulling out shards of glass and splinters from torn flesh and split fingertips and an early set piece concerning Myers infiltrating a hospital (essentially a compacted remake of the original Halloween 2 revealed to be a dream sequence) is a legitimately thrilling creepy and nightmarish thanks to the David Lynchian effect of having the dreamy “Nights In White Satin” by the Moody Blues playing in the background.
However, ultimately Zombie falls foul of the greatest hurdle that befalls almost every slasher sequel ever made insofar that there simply is no new story here to be told with the usual killer-revives-and-contines-rampage plot being regurgitated yet again. Plus Zombie’s curious habit of stocking his background characters as wildly overacting morons is really starting to grate (for example Seymour Coffins: a lude, joke telling host of a massive Halloween rave, outstays his welcome very quickly) and there is much padding of the film as we watch various bottom feeders wander around, desperately waiting for the star of the show to turn up and stab, rend, choke and tear them into oblivion (the violence levels are through the roof). Adding some much needed likeability to this harsh, nasty movie is returning actors Brad Douriff and franchise stalwart Danielle Harris although virtually all of Malcolm McDowell’s scenes as Dr Loomis are AWFUL (even with a baffling Weird Al Yankovic cameo attached).
A definite improvement over his first attempt and filled with bone cracking violence but still oddly formless and featuring a story that’s about as tight as a wind sock, Halloween 2 seems to be one of the most divisive movies Zombie has put out (and that’s saying something).

Flatly put the film is fine, although many out there will disagree with me and that, like Zombie, I’m blatantly taking the Michael…
🌟🌟🌟